The Adventure of Photography: 150 Years of the Photographic Image (1998)

"You press the button. We do the rest."
- copy from the George Eastman's first advertisement for his new company, Kodak

Conceived as an introspective journey that takes you from the first daguerreotypes to war photojournalism, from fashion spreads to the greatest contemporary artists, this program includes 1700 pictures, 300 artists, and will appeal to all photographers - amateur and professional alike. This is not only the history of an amazing art form, it is also the adventure of one century and a half during which photography has captured the image of the collective conscience. 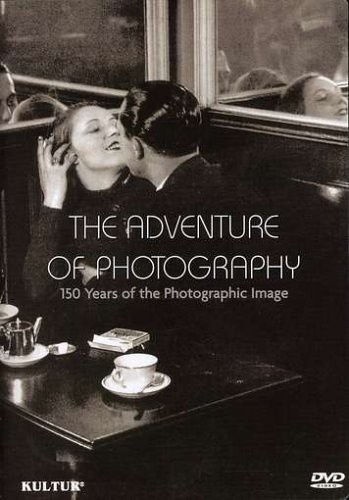 In our increasingly global world, a picture these days is probably worth a whole lot more than the proverbial thousand words. Words are cheap – ask any writer you know – and until we all start speaking Esperanto, have a limited audience. But the power of images is a primal one, and crosses cultures more readily than any perfectly turned phrase.

This ten-part series was produced in France in 1998, and if it isn't an exhaustive history of the medium to date, it has, as its title suggests, a keen sense of adventure. The perspective is sometimes a little too Gallic, for American audiences especially, but there's much in here that's interesting, informative, and quite spectacular to look at.

The first episode, The Precursors, dates the first photographs back to 1826, and quickly tours us through some of the innovators: Louis Daguerre, who started making pictures in 1837; George Eastman, founder of Kodak; and Edwin Land, inventor of the Polaroid, among others. Portability was highly prized early on – for the first time, Europeans were able to see photographs and not just etchings of, say, the pyramids. The episode stops off along the way for images of Yosemite and the American West, a great favorite of early photographers, and even for a quick glance at Weegee, famous for his crime scene photos in the New York tabloids. The Surrealists catches us up with Jean Cocteau and the boys – Ernst, Arp, Apollinaire, Man Ray and the rest of the gang. (It's an indication of the Pariscentric philosophy of this series that the Surrealists get such high billing.) As a movement, Surrealism is probably more literary and painterly than photographic, but there's still a legacy here – especially fun are the photos by Dora Maar, perhaps better known as Picasso's companion. Surrealism qua surrealism cannot survive the death of Andre Breton, in 1965, but others carry the torch – these include Joel Witkin, and (one of my favorites) William Wegman and his weimeraners.

War Photography shows the first combat images from the Crimean War, in 1855, and spends a good bit of time with Matthew Brady, of course; also rightly celebrated is Robert Capa, and his work during the Spanish Civil War. The French perspective is decidedly evident here again, for Vietnam is confined to the 1950s, the years of Dien Bien Phu, and the great international conflict of the 1960s is the one in Algeria. Portraitists allows us to do some celebrity gawking, on both sides of the lens – highlights include Lewis Carroll's photographs of his muse, Alice, and Julia Margaret Cameron's portrait of Darwin. Edward Steichen is celebrated as "the greatest portraitist of the century," and there are many images by Yousuf Karsh (from Churchill to Clinton), Richard Avedon, and Herb Ritts. One of New York's most upstanding citizens is misidentified here as "Al Sharpto." There is lots of narrative here, and not much time to look at individual photos; you'll want to keep your remote nearby and take advantage of the freeze frame feature.

The subject headings are sort of arbitrary, and there is a good amount of repetition – The Photoreporters duplicates some of the same information in the installment on war photography, though this is also the place to see Atget's images of Paris, Dorothea Lange's haunting photos from the Dust Bowl, and Eisenstaedt's iconic V-J Day image of a sailor planting one on some doll in Times Square. Things get fast and loose with the chronology, too. The narrator intones that "in the '60s, time seemed to speed up" – so much so that we're looking at images from CNN from the '80s and '90s as he says that. Just what the boundaries are of news photography aren't clear – it's not quite the drudgery of daily newspaper work when it's, say, Cartier-Bresson at the camera.

Fashion Photography shows us lots of fabulousness – haute couture arrived in Paris just as photography did, and they grew up together. More Steichen, working in Vogue, and Irving Penn's influential work in the 1940s – and of course: supermodels! One of them, Claudia Schiffer, even gets to speak. This episode becomes sort of like paging through one of those glossy magazines the size of a phone book – they're pretty, but that's all. Each episode ends with a strange little text panel, and the one here is stranger than most – it reads in part: "Thanks to photography, fashion is more than fashion. It is a long great moment of eternity." Hop on over to the next disc for Nudes, which after a while starts to seem like little more than a useful pretext for horny old guys to get models to undress. The earliest nudes are from 1840, but soon we're on to Playboy, which is described in impossibly generous terms – "It spoke of sex without being sexist" – and less than nine minutes in, we're back in the 1960s. Robert Mapplethorpe merits some attention, but not as much as the Pirelli calendar, which seems to be the European equivalent to the Sports Illustrated swimsuit issue.

Photography and Science may be the most random of them all. It starts in 1851 with a project documenting France's topography; we see the first police photos, from 1882; and of course Muybridge's famous photos of horses with all their hooves off the ground. But there's lots and lots of NASA footage here, for some reason – Neil Armstrong both on the moon and at his ticker tape parade. We also get another bizarre epigraph: "This photography does not look much." Amateur Photography shows us other people's snapshots, along with a psychologist who says that we find comfort in the family photos of others – can he take my place the next time Uncle Howard tries to bust out the slides from last summer's vacation – A couple of amateurs get a disproportionate amount of screen time – one is famous for taking pictures of photographers, while another is a French art student who dresses up with costumes in props for odd snapshots from photo booths in rail stations – traces of Am&#233;lie. Finally, The Photographic Market asks about the place for photos in the world of TV, and tracks the journey up the ladder for photography as an art form, into galleries, museums and auction houses. Things wind up with a look at some photo ad campaigns – Diesel gets a considerable amount of screen time.

Also worth noting are the occasional translation and pronunciation problems in the English audio track – Ingres is Americanized to "Ang-ress," and a magazine that appears sporadically is described as publishing "spasmodically."

Final Comments
Not the last word on photography, but with more joie de vivre than the buttoned-downed Ken Burns documentary style, this set is something of a mess in terms of organization, but it's got many very, very beautiful photographs, and usually that's more than sufficient. ”